In the morning it felt great to have my cup of tea in front of a fleet of ducks. I like water, it's relaxing. As the houseboat required maintenance we moved to hosts' house which was close to city center. It was a nice place. The only problem was that internet connection was down. For someone who requires it for working this wasn't good news. At least the host could hotspot his phone, but the speed of it was as exciting as counting dust falling. I could hardly check my email. After having a birthday breakfast prepared by the host I went out for a random walk around the city. My first destination was to check out NEMO science center. We saw it while taking a taxi ride and it looked interesting. It didn't look that interesting after I found out you have to take the stairs to the top. Was starting to think if I should even bother with it. Well, nothing is easy in life and you need to put some effort if you want something back. Climbing them wasn't as bad as I thought, just the first 10 steps looked terrible. You can see most of the Amsterdam from the roof and it's a nice place to relax (as long as you stay away from kids). I chose a quiet spot and sit down to read Psycho Cybernetics. You can't get the original on kindle and I chose to return without it after a trip. 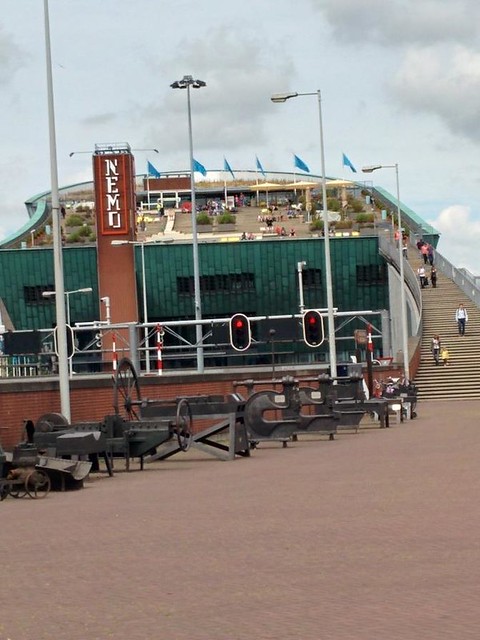 Can't remember exactly which places I visited, but I took a large circle around town. I roughly guessing that during my trips I walk about 10-20 kilometers per day. Of course Amsterdam is a great city to rent a bike and explore it this way, but I don't see a point for that personally. For me I get tired about the same. It's just the question of time (bike takes a bit less) which I had enough, so I chose the transport type I like most - my legs. 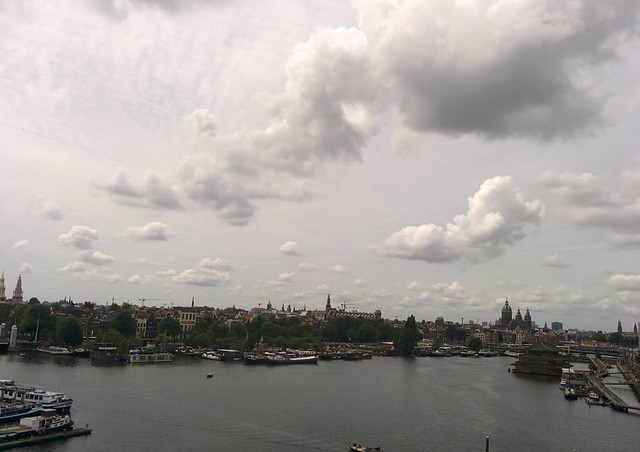 After returning the host invited to join them to watch a game in a city. Unlike most people think I'm not against the sports and if I had enough health or skills I would do them. That I don't understand is the point of watching a bunch of people with the ball. I can find more interesting things to do. Recently someone asked "what things?" and my answer was "You're old enough, use your imagination." But sure, why not, let's try it, who knows maybe I will enjoy it. The game was a nice one, but I could still just watch 2 minute reel the next day and save at least an hour.

The tip time: avoid drinking beer (or a lot of any beverage) in Netherlands. Why? Because you have to pay for the toilet in bars. And no, they don't care that you're a customer. You want to piss - you pay. As they don't even have normal beer (meaning you can drink as much as you want and you won't get drunk) if you went a little overboard you could end up spending more on WC than on the drinks. Drink responsibly.

After a while we went to a house boat. Amsterdam is beautiful during the night. I don't know about you, but I personally find it funny when people try to hide the usage of drugs. Like if you close yourself in the toilet and I hear *cocaine snorting sounds* like I will be thinking that you're cleaning the toilet. Then four of us went to a club. One high on cocaine, one on ecstasy, one on weed and one (me) had a few beers. And from that I saw, I still had the most fun (and it wasn't a fun night). Before entering we first had to wait until some overdosed girl was taken out. Kids, use drugs responsibly.

You might kind of guess it, but I'm not a big fan of clubs. I'm not against them or anything, it's just not for me. If it's impossible to have a normal conversation (the one were your only reply is nod then lips stop moving) then the place is too loud. Give me one person who loves to talk (I'm better listener than talker), a cup of tea, cozy atmosphere and I will be having the best night of my life. The place was crowded, full of smoke and DJs were so terrible that I wanted to go to them and slap them in the face and just tell them to leave the Spotify playing without messing with controls. One thing I noticed is that I stopped caring about tobacco smokes. Don't like it, it makes me nauseating, but don't care and don't ever want to do that again. Then came 3 AM and I think I know how Cinderella must have felt when midnight came. All the better looking (from outside) ass grinders (girls that grind their asses into anything that moves or doesn't move) in a blink of an eye changed into some alligator monsters. Group or no group, I don't care, I chose not to stay a second longer in there. They looked hungry and I'm too old to be grinded into a wall.

The next day I chose to go to Westerpark because it looked like a big splash of green and was close from my position. My suggestion is just to avoid it and better go to Vondelpark. Only the start of it is a real park and the rest is I think some kind off housings (haven't found the entry). You end up walking a side street all the way around without being able to enjoy any greenery. As my new host will be able to check-in me only in the evening we made a deal that I will leave some things at her place so I wouldn't have to walk with them everywhere tomorrow (knowing with how much I travel it's not that big of a deal). Can't remember the exact description but it make me happy thinking about "go meet a girl in a red dress." Sometimes silly things make you smile. Went by the Anne Frank house and right away I knew that I won't be visiting it (especially after the host added some more info about it). No way I'm standing in that long of a line for something I don't find interesting. I was invited for a cup of tea, we talked and learned about each other. One of many enjoyable conversations we had with the host. Can't remember that I did for the rest of the day.

The next day after waking up and noticing that WiFi is still not available I packed my stuff and left. The host was not home, but I was not going to waste precious hours I could spend working and earning money to pay off this trip. The weather was gray and wet, not enjoyable. I chose to stop at some organic burger place with a big table in the corner (window included). You wouldn't believe how productive you can be after changing the scenery and with a cold beer nearby. Did all my planned work in about an hour surprising myself and my client. Too bad I was charging by an hour. Time for another tip. In Amsterdam you don't need to worry much if you might need WiFi for something. Some places require using some app (skip those), some have it available (you stand in the street doing what you do) and some have the password on their menu. You might need to shop around to find the WiFi you like, but you will find it somewhere if needed. 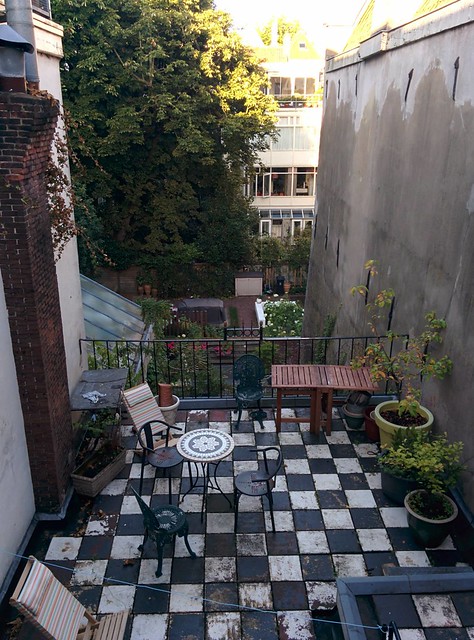 The new place I was staying at was a bit strange, but nice. Third floor, from one window you can see the street and canals. My room was in the attic which has a window to the inner yard. It was quiet except for birds singing (strangely I liked that). Most of the mornings I woke up with sun tickling my naked leg. The architecture I found a bit strange and hard to figure out. Every day I had to watch out not to be killed by circular stairs or low ceilings (I'm tall). Also I find it strange that everything is small when Dutch people are tall. I think some great-great-grandfather just went "How about we mess up with future generations and build everything small?" The host was a very lively French girl. I enjoyed our conversations and dinners together a lot. We became friends during this trip. She found my approach to minimalism interesting. She accepted my suggestion to try it out and simplify her own life by removing material chains. I also gave her many heart attacks (which I found satisfying) as most people are not used to someone who moves around like a ghost.