After taking an inventory of what happened so far decided now was the time to:

I was in no hurry to start going through museums and similar places. I was here for two weeks and decided to spend the weekend just exploring the city. Also after I move to another place I will receive the museum card from my host, saving me some money & time.

After a while I went inside one shop which looked like they were selling SIM cards. If you want to imagine the conversation better the merchant was Indian (like Russell Peters said "I don't make stereotypes, I see them").

"Hi, I would like a local SIM card with a data plan, do you have any?"

"The Nexus 5 *confused with a raised eyebrow*, does it make any difference?"

"I never had Nexus, I can do Apple, Samsung, Nokia. Here are the instructions how to install it. I don't know if it will work on your phone."

After some haggling we decided to try and if it will work, I will pay. If it will not work he will take the card back and I will not need to pay. Good deal, I have nothing to lose after all, or so I thought. After changing the card and rebooting the phone the language automatically changed to Dutch (without asking me about it), started installing some apps and if you enter the settings (to change the language or enable WiFi) the application would just close down. WTF?!? I wasn't expecting my phone catching an STD. I had doubts about myself, who knows were I might end sticking my USB stick in, but I didn't expect this happening to my phone. Thanked the shop keeper for trying and left without local SIM card.

Continued to keep going down the street as somewhere around here was a park (I love green & blue colors on maps). At the same time trying to figure out how to at least change the language to English. What I found is what if you restart the phone you have about few seconds of browsing the settings app before it's closed. Not an easy task to change something in few seconds when you don't even know where it is. After a while I just gave up as this was unsustainable. Restarting the phone took about a minute and it provides only a few seconds which probably won't be enough. Another problem was what I was kind of lost, the GPS/maps application was in Dutch and without any cache. The easy way would be just to go back, which is boring. After calculating the direction I should move to I continued my travels.

After reaching a place which was close to the boat house stopped for some traditional Dutch pancakes. At first trying to think how to fix the phone. Soon changed that with just drinking my mint tea with honey and enjoying the fresh air. Decided my best choice would be to go back home, try to figure out how to fix my phone or at least to cache the map. 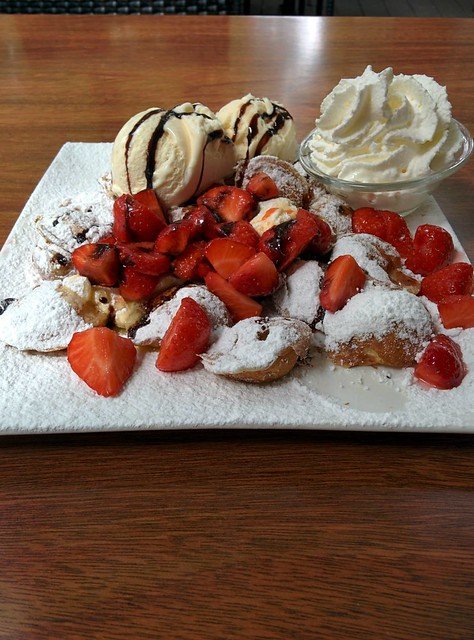 The Google wasn't helpful with answers about what I should do. Except for step-by-step instructions where to find the languages. Which wasn't helpful as settings application wasn't working. In the end I was able to fix my phone. Not really sure why or how, but I was glad for settings application to start working allowing me to go back to English language. The fix was kind of simple. Inserted my original SIM card which doesn't work outside my country, but I'm guessing the "virus" figured it was not able to do his thing and just left. Or something along those lines. It's a mystery to me. I was just glad for it to start working the way it's supposed to work. Except for antivirus being in English which I was able to change only after about a month.

Back in full gear went to look for that park again. Small, but nice park. As long as you don't step into any dog shit that is. Decided it's time to visit the Vondelpark park. It was the weekend and streets can get noisy from all the tourists who come to be loud, be stupid, be drunk, be unhappy and be back in 9-to-5 job on Monday. Don't get offended if any of those describe you. I don't have anything against having some fun (choose your own definition) or anything like that, I just don't think that because it's the weekend and you went to another country it allows you to be an idiot. I know common sense is dead, but try to find it.

The Vondelpark is wonderful. It's a large area with green zones, water and all kinds of people in it. If the day is sunny & warm it's perfect to just lie down and relax, maybe with a book, maybe without one. It takes a while to walk through whole park, especially if you get lost as roads can sometime get confusing (they are wiggly). It has public toilets, refreshments (you can always bring your own), benches. It should take care of most of your needs. You will also meet some "strange people", I call them "crackers." Don't know why but this is what comes to my head then I think about them (in the voice of Eddie Griffin). I met three different categories during my two weeks. The first one being friendly ones which talk with you about something and after a bit asks if maybe you could share some coins. The second one was similar to friendlies except I call them idiots. I try to be positive, but when you tell me about how hard their life is and they have no money for food because he wasted couple hundred euros yesterday in casino. Sorry, this is were I draw the line and walk away. I'm not good enough yet to deal with this kind of situations. The third one are the aggressive kind and best to avoid as it wouldn't be surprising if one of them stabbed you (I have good imagination).

Before leaving the park stopped to listen to one guy playing incredible jazz music. Liked it so much that stopped to listen to it while talking with his friends. They were from Chile and damn, their language is beautiful. A bit later two other people stopped to listen to music and join the conversation. After a while a new guy mentioned that if someone wants Marilyn Monroe LSD he has some to sell. I would guess it would be an easy way to spice up my birthday and after listening to Tim Ferriss podcast I sometimes wonder that it would be a positive experience to experiment a little with psychedelic drugs. The thing is that some risks I like to take in the controlled environment. Taking who knows what, with who knows who, who knows were for me personally isn't that comforting or something I couldn't live without.