On June of 2015 I attended the Dutch PHP conference and this is a short review of it.

The conference was at Amsterdam RAI venue which is outside city center. Organizers provided directions how to get to it from city center and it's not hard to find. Depending on where you're staying for conference it might have been easier or harder to reach it. I heard some people that they would like it closer to their hotel as they don't want to figure out how to use public transport or take it for 20 minutes to get to the venue. I didn't had a direct route from my airbnb place to the venue, but it was not a big problem for me. For someone who likes exploring places by choosing a direction and walking in it a 45 minute walk to venue is a good way to freshen up my head.

Venue is big and well supported by staff. Signs make it easy to find where you need to go. The staff is always available to provide you with refreshments (tea, coffee, juice, water) and clean up. Stand up tables make it easy to discuss with other people while having a refreshment and sitting desks are comfortable if you need to do some work.

This might be normal for Dutch people, but I don't think of a bunch of cold sandwiches as a normal lunch. For someone who tries to avoid carbs it's nerving to think how many days will be spent feeling like crap from all that bread. I guess this is my own problem for not preparing and bringing something to eat. Still, from all my experience I personally hate Dutch food, not my cuisine.

On first day I was attending Introduction to Event Sourcing and CQRS by Beau D. Simensen & Willem-Jan Zijderveld. Lately I'm very into Domain Driven Design and similar ways of improving applications so this workshop gave a good introduction into CQRS. The first part of workshop was explaining all the principles. Found that trying to follow the host and do it on my own laptop wasn't very easy due to it going too fast and having some issues. After deciding to just follow the host found the experience much better. This allowed to focus better on that is going on rather than trying to multi-task. The second part of the workshop was doing the same things, but using Broadway library. Think the workshop was well done. It might be better if the git repository was tagged after each step, so for anyone trying to follow along if they are getting behind they could just checkout the step being currently done.

After the workshops anyone who wanted could attend code night. During it you could work on one of available open source projects helping to improve them. It had drinks, pizza and great people to talk & work with. At the end of code night during the raffle it was possible to win some prizes. It was well organized and think the code night was a success. Watch the time lapse videos of it (part 1 & part 2).

The conference had a lot of sponsors. You could play games, pick up swag, learn about new tools in sponsor booths. At the end of the conference it was possible to win prizes through the raffle.

Only the second talk was delayed by 15 minutes, but otherwise all conference run like well maintained clock. All talks were on time, none went over, good amount of breaks between tasks.

For each time slot 5 different talks were going at the same time. For anyone interested an un-official talks were available. The talks were very well done with all/most of the problems fixed (from the talks I attended). The talks weren't just about PHP so you could always choose topics which interest you most (devops, testing, JavaScript, CSS, etc.).

The opening keynote was Hacking Foresight from Hindsight by Josh Holmes. The important point of the talk was that we shouldn't try to do everything ourselves and should try to find mentors who will help us grow faster professionally & personally.

For the first talk I went to Get some hypermedia up in your API by Victor Welling. During it he explained how to solve problems like documentation, versioning, visibility of your API by extending with with HAL.

I'm a tall guy and ergonomically it's more comfortable to stay farther away from the screen. At that moment decided to experiment with sitting in the front rows. You don't need to spend all the time looking at the screen and found that I enjoyed having a closer proximity/relationship with a speaker much more than being able to see the screen all the time.

The second talk I chose was Automation made simple with Ansible by Erika Heidi. I played a little with Ansible before. Repetition helps with retaining information. The talk gradually explains what is possible with Ansible and after it you should be in a good position to play around with it in your projects. After talking with Erika between talks, I think now I know how my phone feels when I plug it to charge the batteries. She is a very positive girl and talking with her you can feel your own batteries charging.

Had a hard choice for third talk as Mathias Verraes & Matthias Noback was talking at the same slot. Chose to go to Towards Modelling Processes by Mathias Verraes. Talk had a simulated event storming and the main point of talk was explaining how to think in temporal model, not just structural. 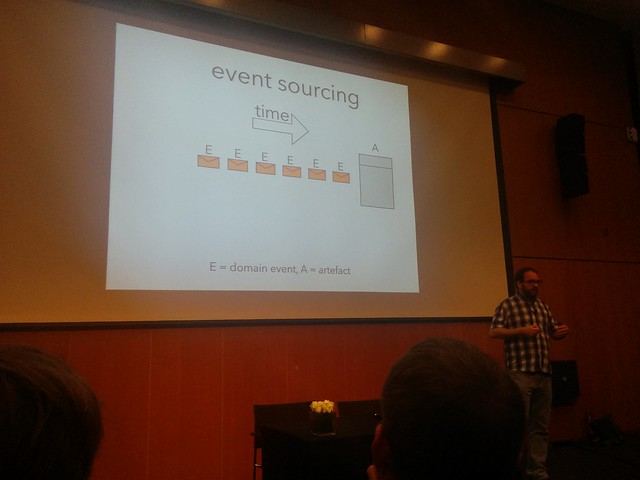 Was a little late for Command Bus to Awesome Town by Ross Tuck talk. The speaker was lively with enough jokes between the slides. The talk explained what is command bus & why/how you might want to use one in your project.

During the conference I went to enough talks about event sourcing and similar topics, but going to Let's Write Some History! by Willem-Jan Zijderveld helped me to understand a few more concepts I was missing/confused.

For last first day talk I chose Journey into your Lizard Brain by Rafael Dohms. During it he shared a personal story, explained how developers think & gave tips on how to become a better developer. One of the most important points in my opinion would be to focus on the current moment. I think conferences could have more of "soft" talks as I find them refreshing when mixed with technical talks. 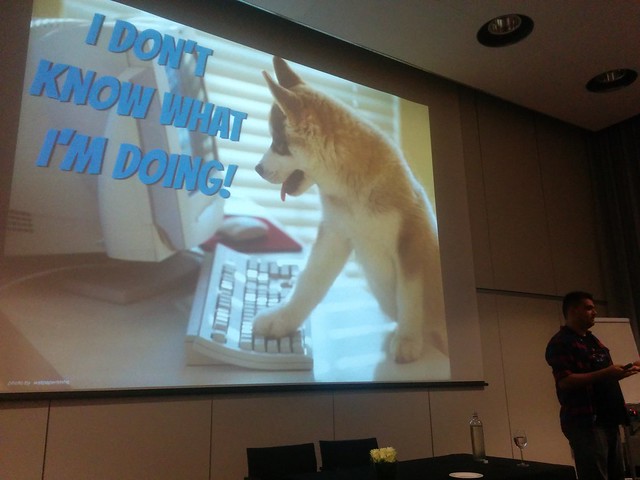 The Conference Social was at Akhnaton. Organizers provided directions how to get from venue to it. It was easy to find the bar and after arrival everyone received drink tokens. Received enough tokens to spend the rest of the evening with a bottle of water in my hand (might be a different experience depending on your drinking habits).

The day before I decided to skip the morning talk. Even thought woke up refreshed I'm trying to learn to make a decision and keep with it (unless the situation changes).

For second talk I went to Hexagonal architecture - message-oriented software design by Matthias Noback. The talk was well paced, explaining how to improve your applications by focusing on messages. 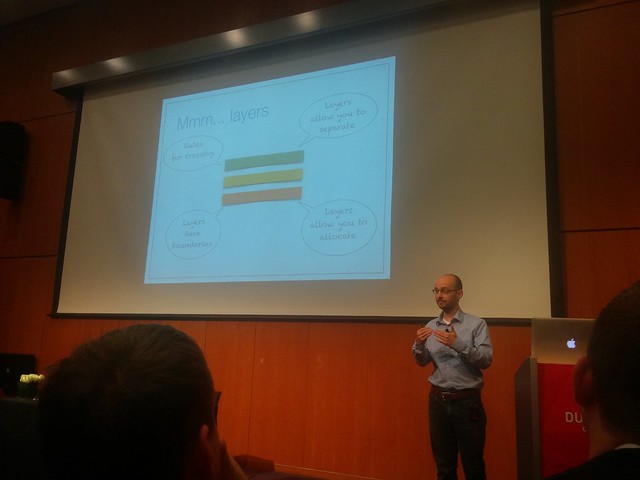 I think the composer is a wonderful tool making my life much easier. I think I know enough of it to do what is needed and advise others of best practices (like using CLI and not editing JSON file). It never hurts to make sure so I went to Composer The Right Way by Rafael Dohms. The talk explained some parts which you might not use so often & how to use composer better. If you don't use composer (or know what it is) stop making your life harder!

For the fourth talk was thinking about going to Implement Single Sign On easily with Symfony by Sarah Khalil. When considered that can't think of anything were I would need to implement it in the near future and need to mix a less technical talk for better ratio. Went to Software architecture in an agile age by Harrie Verveer. Maybe it's the trauma from college when had to do a lot of UML diagrams or maybe being sleepy after lunch, but expected a little more from the talk. It was still a good talk explaining how to work better on your projects. I agree with most important idea what no matter which format you use it's good to make at least few notes/diagrams before you start building things. 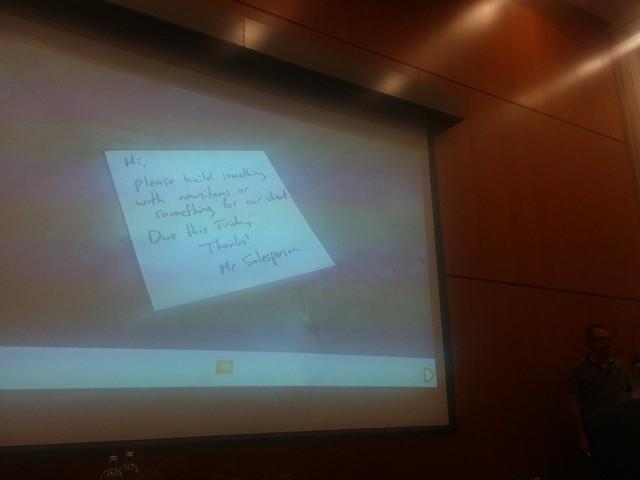 For last talk chose to go to Adding 1.21 Gigawatts to Application with RabbitMQ by James Titcumb. The talk is very technical with code examples and at some points it can feel a little dry. We talked with a speaker about how it can be improved. The talk explains very well how to use RabbitMQ in your projects, including pitfalls to avoid.

The closing keynote Behind the Scenes of Maintaining an Open Source Project was done by Jordi Boggiano about how open source project looks behind the scenes. He went through different stages of it (maintenance, anger, etc.) including anecdotes and personal stories. Staying behind the screen we often forget about the world behind our backs and that open source is only possible thanks to the community and people who spend their energy & time.

I enjoyed the conference a lot and really happy about attending it. It's was nice to put Twitter/GitHub profiles with real people. Would like to thank the organizers, speakers, audience for three great days of new experiences & sharing knowledge. In the end I would like to borrow (in other words steal) the quote from Michelle Sanver which summarizes what is a conference very well - "A conference is a party with talks"