On the last day in Seville I chose to make the last round through the city center and grab something to eat. I have no idea what day was today (haven't learned Spanish that much), but I do know it was impossible to get any food. At best everyone was providing you with coffee, nothing more. Don't like things like this. After making 3 trips around the city and finally finding a restaurant which had food the day became sunny again.

Even thought I was enjoying my stay in Seville, it was time to start moving towards Madrid. I was excited as it would mean a new city, attending the conference and testing the AVE train. One problem I had with a train was that it provided no WiFi. For 3 hours of traveling and that price for a ticket I would definitely expect it, even if you had to pay for it. Best you can get is free headphones for watching the movie. At least for the first part of the trip you can enjoy some nice scenery outside. Later all that disappears and you get some bland scenery which is not breathtaking. When you're sitting it's hard to notice that the train is going at 300 km/h. If you want to notice that it's moving try walking around (well, then you have to sit for 3 hours you will probably be doing it either way). I would say that I enjoyed the ride and if it had the WiFi it would be a great place to work. Next time I think I will better look at plane flights as prices are about the same/cheaper and it takes less time. Still worth to try.

The conference was in a hotel outside the city center meaning I wasn't staying at the Madrid. My next place for a time being was Coslada. The machines which sell train tickets are not English friendly. They all have the button to change the language, but no matter how much I was clicking English it didn't change anything. I guess the budget for the project run out before they implemented the translations. Do something and see what happens is the response in situations like this so after a few presses I had my train ticket. Had to remember that a terrible thing public transport is; with everyone running to get inside the train and being compressed with a bunch of other people. This is why I walk if it's possible. 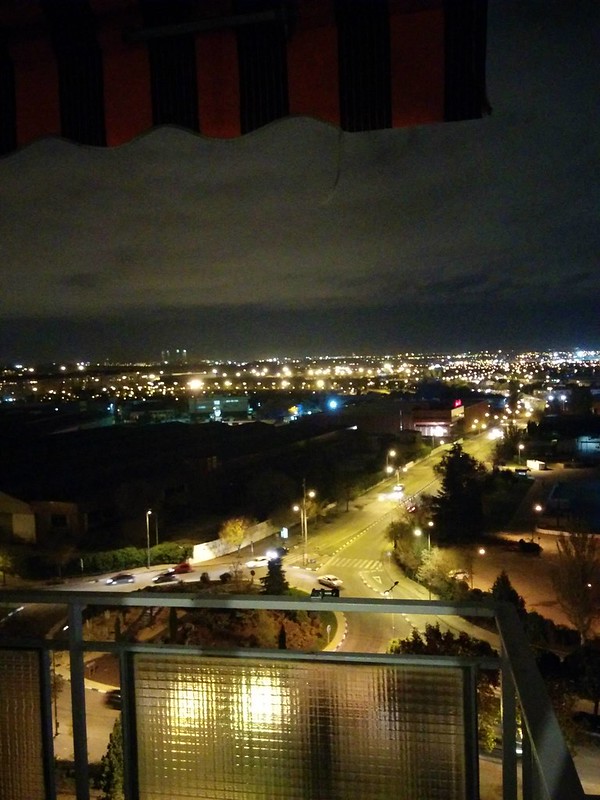 Coslada is an Olympic city and if Spain ever had the Olympic games it should thrive. Until it happens it's another boring small city with nothing to do. I spent some time walking around and didn't find any out of ordinary places. Another problem is what finding someone who talks English is hard, making you back away from places like the person speaking at you is about to commence some stabbing. The weather which was cold, rainy and depressing didn't help either. The host I was staying at was friendly and helpful. He also had two cats, one completely black and you just want to touch him, but he is not a social type and I respect that so I had to hold myself. He became very friendly when you started eating. Another cat in my opinion is too friendly and I just don't trust cats that are friendly. But she did know how to show affection better than most of my girl friends. 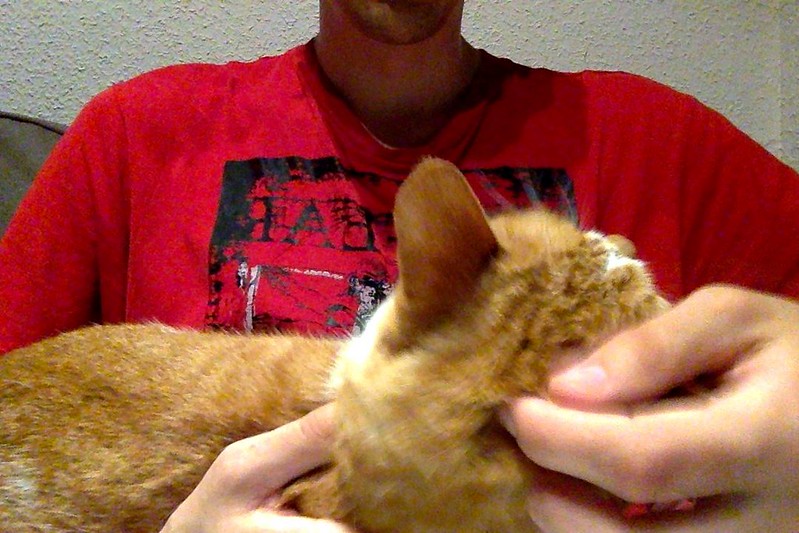 I will skip the conference parts which I liked and would like to thank the SensioLabs for organizing it. Met a lot of nice people. Had a lot of interesting discussions. Enjoyed fun moments like DDoS attack on hotel revolting door, testing the capacity of the taxi and best of all passing the test of not even thinking about having an alcoholic beverage during social interactions. Glad I went to this conference. 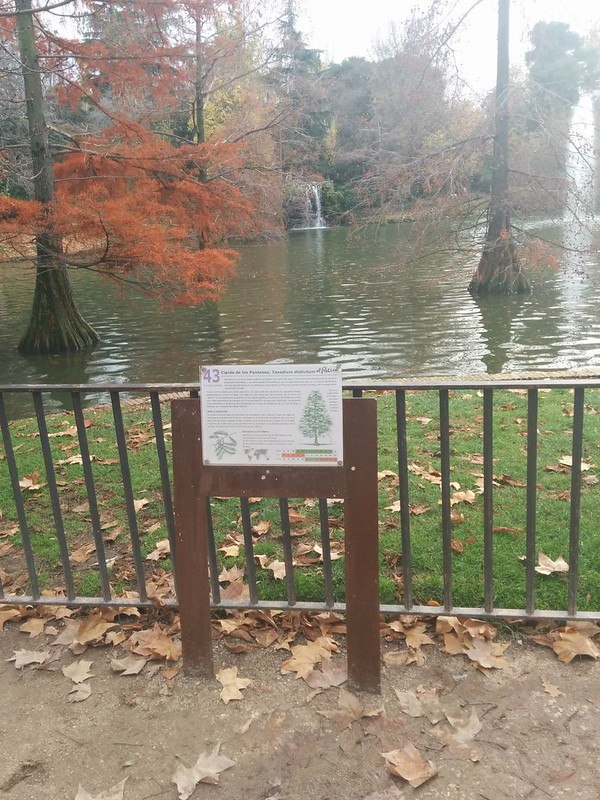 Haven't seen a lot of Madrid as I went to it only once, but it didn't make a big impression on me. My hosts told me that Madrid had a lot of great museums. After consideration decided that I don't care too much about it and would rather just walk around randomly. The downtown felt like the downtown of Vilnius just more enlarged and with a pinch of Spanish spice. It also gave a smell of a "commercial" (run-run-run) kind of city, but can't confirm it (I'm a bigger fan of chill out cities like Seville). Near the rail station is a big park which I would have enjoyed a lot if it wasn't during Autumn (it might be colorful, but fallen leaves & rain isn't my thing). I'm sure the Madrid is a great city, but it's just not for me. 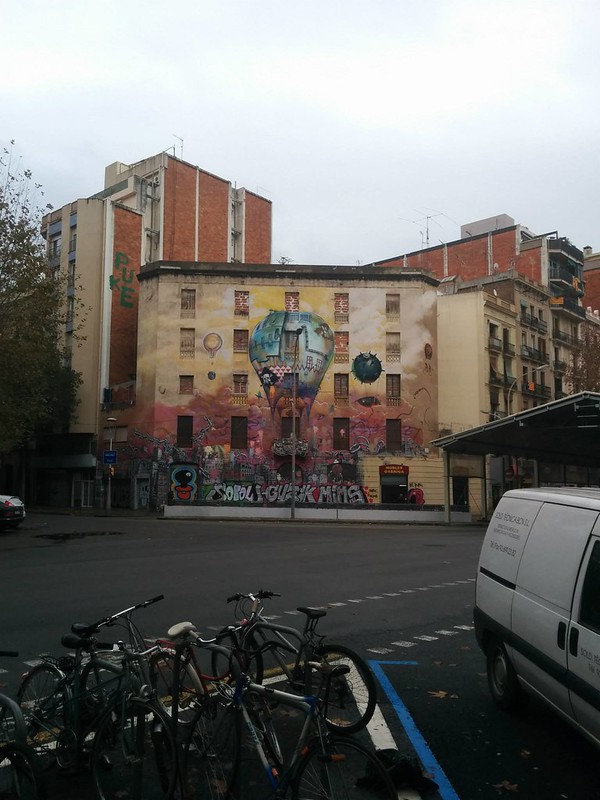 On the December 3rd it was time to go back to Barcelona. One interesting thing you might find in the train station is a section with palms growing. Not anything wonderful or something like that, but still nice seeing big palms indoors. Keep in mind that departures for AVE trains are from the second floor. Just in case you arrive a few minutes before departure and the door with the number from which it should leave isn't opening (fortunately I had a few more minutes to figure this out). 3 hours later I was back in Barcelona, which this time wasn't looking so inviting. It's strange to come back after a few weeks and see a different city (colder, darker, etc.). The winter is coming.

For the rest of the days I explored another part of Barcelona with some old walls or something like that, but nothing out of ordinary. The beach was out of season and empty. The streets were more or less the same. Just with the rain and cold weather. Not fun walking everywhere anymore. Mostly was just killing time before the flight date. At least it was good for my productivity, you get your work done when you can't spend whole day walking. Day before me leaving the host returned from USA and we had an interesting chat on many topics. 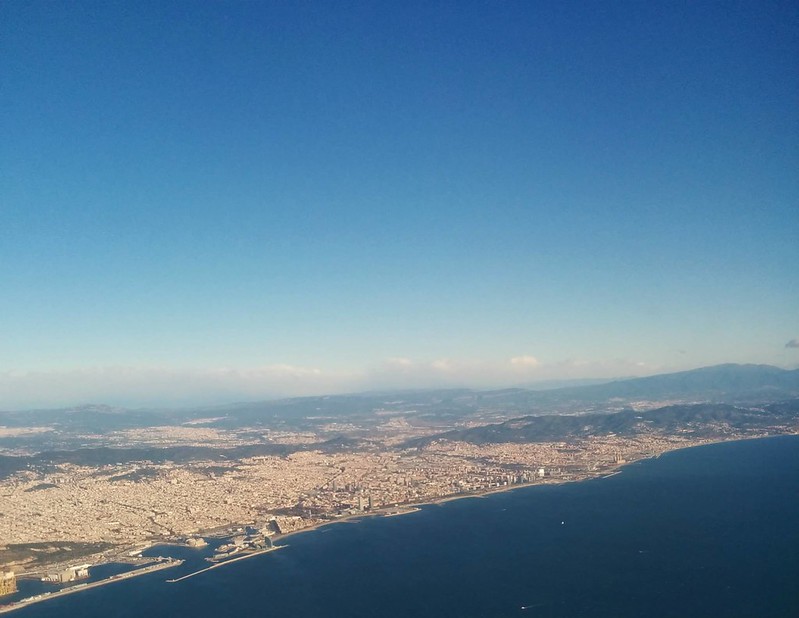 As I understood the day was windy and it took a while before the plane took off (at least we had turbulence, just the way I like it). On the flight back decided to try out working on the plane. I try to avoid that just for saving my eyes, but spending 3 hours just listening to music didn't look fun. After seat belt sign was turned off for the second time I immersed myself into the realm of code. What I like about having no Internet & Google is what you get very creative when you need some information and can't get it. Also it's a good mindset to have - preparing what you need while online so it would be possible to continue working while offline. After about 3 hours the plane landed in Vilnius. I think it was first time I was happy to be back in Lithuania and for it being a winter season. That first chilly breath of air was very refreshing. It's the small details that make you appreciate life.

This is about it for my first visit to Spain. I don't think it's the country for me and probably would be hard making it my home. I wouldn't mind returning to it (I guess especially to the southern parts).