I wanted to visit the Hortus Botanicus and Natura Artis Magistra before leaving. Unfortunately the last few days of my stay was rainy and walking around in the rain didn't feel like an exciting way to spend time. The rain let down a little bit giving me chance to visit the zoo. At first I was thinking about skipping it. I seen animals in the cage before so it won't be anything interesting. This is what I thought, but I'm glad I just did it anyway. The ticket isn't cheap, but for the value you get it's worth it. After buying the ticket was asked if I would like to buy the map and the money spent for it will be used to improve the elephant section. I try to avoid extras like guided tours, audio tours, etc., but elephants never did anything bad to me so why not, let's help the little guys/gals. The map doesn't hurt as the place is enormous.

The first thing I noticed is that animals are actually not in the cages. So you better behave as there is not a lot of protection between getting your ass kicked. Seeing camels walking around with a bunch of other animals and being separated only by a narrow line of water looks awesome, disturbing, relaxing. All at the same time. Walking by them is like walking through a bad neighborhood, you try to look like you belong there and are ready to run just in case. Walking past the birds gives a different reaction. It's all in my head, but I just wanted to run to them, start making motions from ground to air with my hands and shouting "Fly you fools!! Freedom, fly to freedom!!" I'm sure if they could talk, their reaction to this would be "Go eF yourself!"

After calming myself down started to wander around the zoo, looking at animals, reading about them and just having good time. Too bad the tigers (I think) habitat was closed for renovations. Walked past the cages with parrots. I do dislike them. They are just too noisy for my taste. Around that time the rain started to pick up again. Fortunately I just reached the aquarium part of the zoo giving me shelter from it. 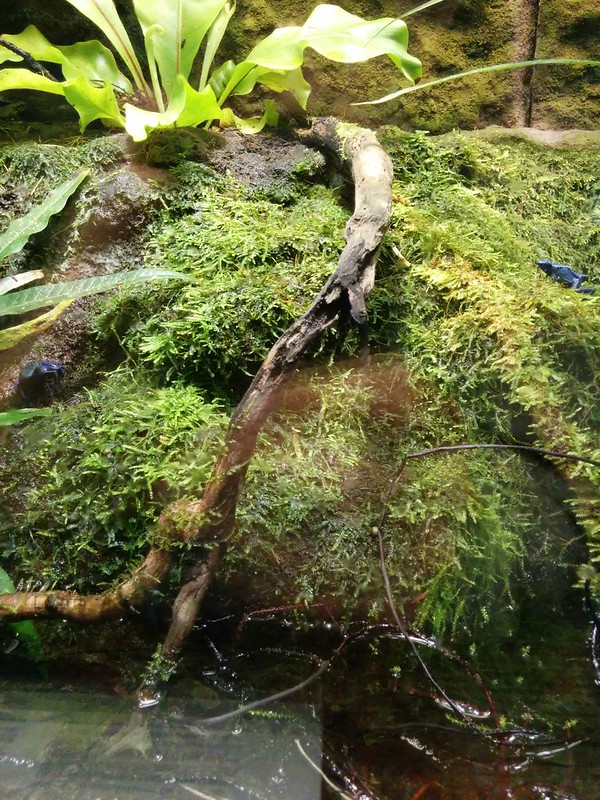 The aquarium is nice with lots of colors. Got into an eye staring contest with a blue frog (wanted to find out if she's real or not). Until noticed that I got surrounded by a bunch of her friends and it was time for me to leave. You can see a bunch of strange fishes, some of which makes you think about against getting a diver's license. Just too many things which got away from the horror movie and would eat you. 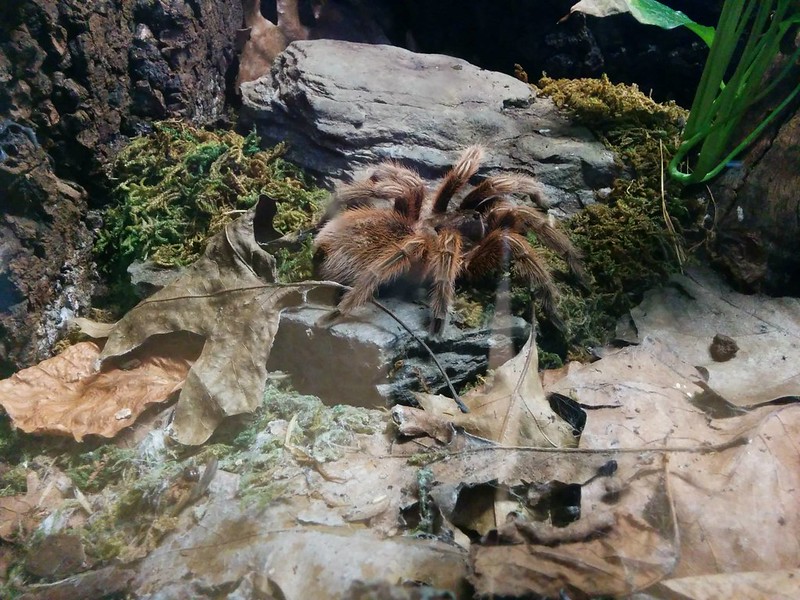 After wandering around the zoo for a little longer found the terrarium with spiders & snakes & other cute lovely pets. It would be great to visit them during the feeding time. Or if they would let you pet them (I'm against that as it would be too much stress for the poor animal, but I just always like touching & biting new/interesting things).

You start understanding they don't care too much about cages when you reach one of the "inclusive areas" you can travel through. The first one for me was the butterflies habitat. It's something like a small patch of a tropical forest you can walk around with butterflies flying all around you. In some places where there food for them and you could take a closer look. So far I can't compare it, but it was the first time experience on how the tropical forest might feel & I liked to get that under my belt. Thanks to my imagination I was also expecting a velociraptor to run past me, but I guess you can't get everything you want. *Side note: After a year I visited Hortus Botanicus which allows you to experience different climate zones, still no velociraptors :(* 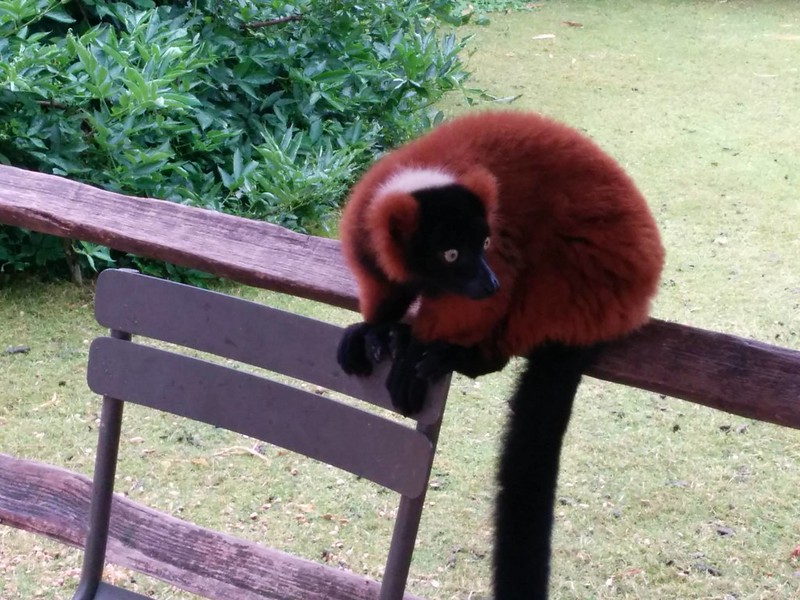 Another open area where you can get closer to animals was the lemur patch. You can walk right past them and maybe get a massage if you sit down (maybe if you forgot to see the bite signs). They look cute enough, but I didn't trust them enough for that. Was nice to learn that they have hands similar to human hands, with fingers and everything. You live and learn. They can scream loud too.

Walking around found the wolf's habitat. Don't know why, but I adore them. Maybe because I met a wolf while walking alone in the forest when I was about 5-7 years old. Maybe for some other reason. I do find them beautiful & royal animals. Too bad due to rain or other reasons it was hard to have a closer look at them.

After a while I reached a tropical house (I think it's how it's called). The signs about not letting out the animals and getting bitten didn't made me comfortable. If it wasn't safe they won't be allowing you to enter and with this thought I entered the house. I slowly started going in deeper, looking around to make sure no one attacks me by surprise and still not sure if I'm allowed in here. 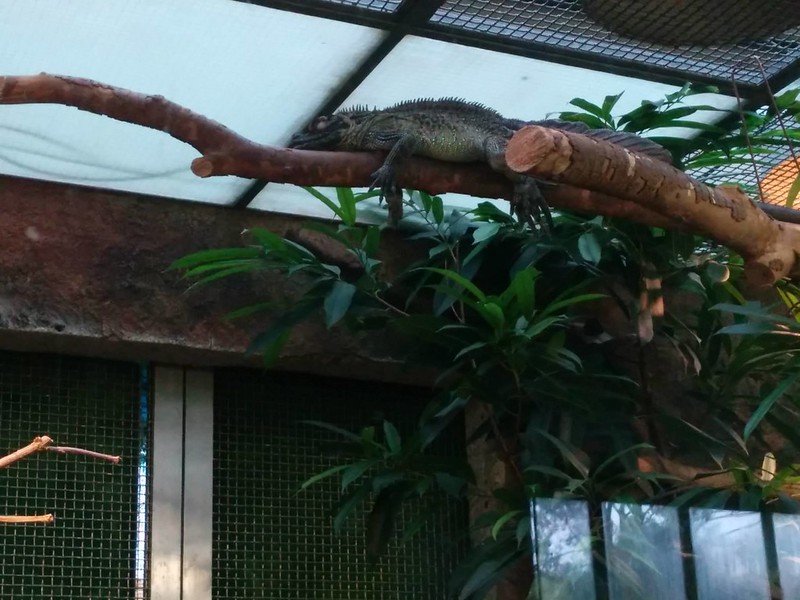 There is two categories of animals I "fear" - rodents (rats, mice, etc.) & amphibians (frogs, etc.). I'm not sure why. I just don't like them. Even in the toy shop I will walk around them. I include (included actually from then) bats to the same category thinking of them as flying rats. When I was about in the middle of the house from the other part of it the bat started flying into me, flew past me, turned around and flew past me again. At that moment I was crouching on the floor with my hands on my head, not sure what I should do.

The zoo employees who were sitting and talking told me it's safe and I don't need to be afraid of them. Easy for you to say, I don't see monsters flying past your head (all in my head, enchanted by wicked imagination). We started talking and she took me to the tree where the bat was eating. Once you get close enough to punch them in the face they are actually cute monsters. 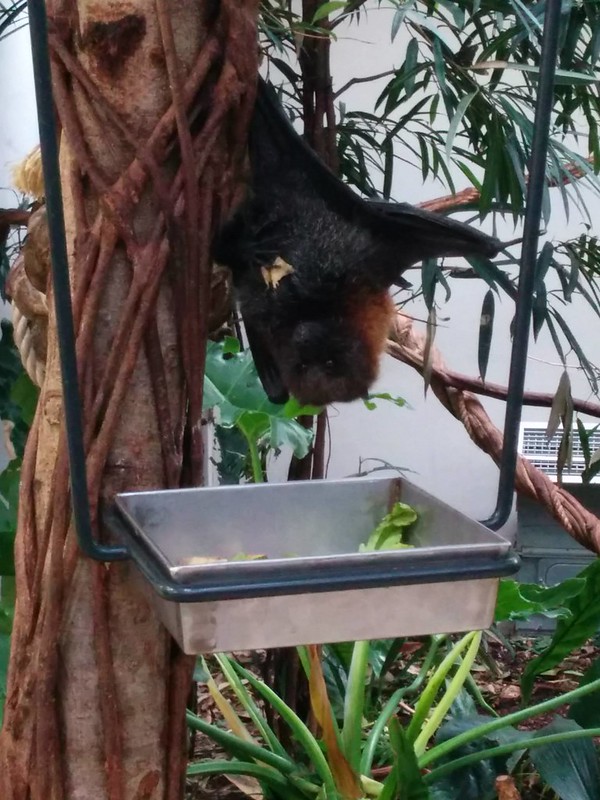 She helped me to find all the animals what are in the house and their stories. The big lizards and the small lizards. The monkeys, how one of them has a broken tail and another one just had a baby. That squirrel animal from Ice Age movie. We also talked about the zoo itself. Was nice to chat with her and at the end I was comfortable staying in that house. Still being alert to do a karate chop in case someone attacked. I know, I'm paranoid.

I put my nose inside the birds house (which was adjacent). I'm not a big fan of birds (they are too noisy for me) & I didn't want to get bombarded by crap so turned around and left.

The zoo was close to closing time so I chose to go past the water birds habitat which ends near exit. For someone who can't (probably) swim and being surrounded by birds which looks like drug dealers it wasn't very comfortable walking through a narrow metal bridge (without anything to hang on). But it's a new experience. 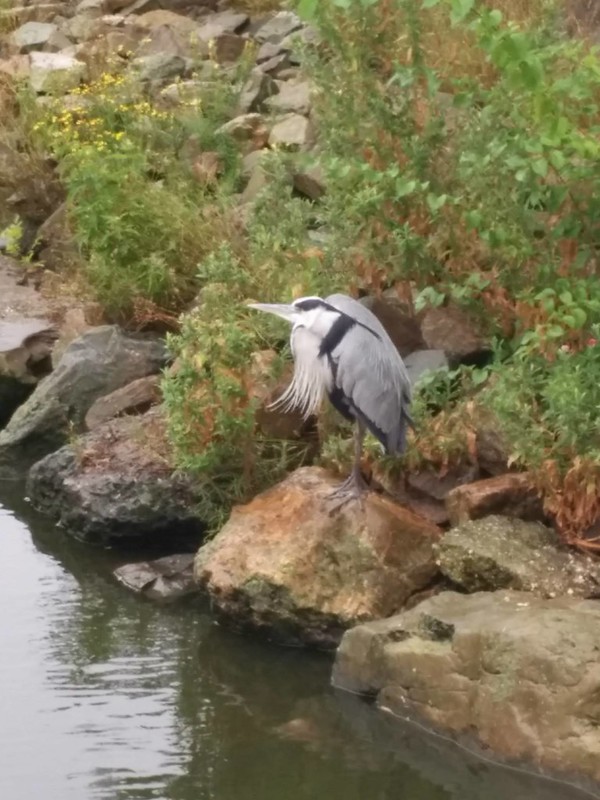 I'm glad I didn't listen to the voice in my head (something I should do more often) and went to the zoo. It was a surprise and a new experience to walk so close to animals not in cages. If you get a chance I would suggest to check it out.